February 21, 2011 is my nephew's 4th birthday.  It seems strange that four short years ago I didn't know him or have a ridiculously large stash of toys and Transformers dinnerware at my apartment.

The night Ax was born, after waiting for a few hours we were allowed to see my brother, sis-in-law and Axton.  "We" included my parents, grandparents, aunt, brothers; and my sister-in-law's father and sister.  I made a mental note to refrain from hoarding the baby and to remember to wait my turn.....I was nearly at the bottom of the totem pole.

When we arrived in the room, Ax was under a light and no one could hold him.  I think they were trying to get his temperature up.  We crowded around him and snapped pictures from every angle and touched his tiny fingers and his ginormous feet!


Then, suddenly a nurse popped back into the room and said, "Who wants him first?"
I looked around expecting everyone to start running (in slow motion) toward him, hitting each other with chairs, trying to be the first and yelling (in slow motion distorted voices) "Nooooo!  I waaaannnntttt hhhiiimmmm ffffiiirrrsssT!"--much to my disappointment the grand- and great-grandparents, instead, all politely looked at each other and said, "No, you go first."  "No, you."  "No, really....you should hold him fir-"

I sort of just blurted it out and my hand shot up.  I'm pretty sure my face looked crazy too but seriously, precious time was being wasted with formalities.  I quickly surveyed the room with my eyes to make sure no one was planning on writing me out of their will and took Axton from the nurse.....and THAT is when this picture was taken. 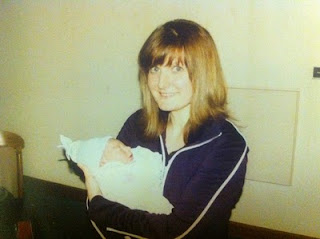 ﻿
For the first year of his life I was Axton's evening baby-sitter.  I had him three days a week from 6:00 PM to 1:00 AM.  Right after he was born I started a new job and went back to college.  Looking back it was very interesting timing.

We had a routine that changed as he got older, of course.  I remember for a few months Axton had terrible colick and the only way I could get him to sleep was to sit in my recliner...half reclined....I layed him on my chest with his head turned toward my neck (so that I could feel him breathing once he fell asleep) and I would pat him rhythmically while breathing big, full, calm breaths until he stopped screeeeaaaaaming.  Something about the angle of the chair and the patting and the remaining calm aspect eventually lulled him to sleep.

It was actually painful for me to sit like that plus I needed to write papers for school so I ended up using resistance bands to attach my laptop to my legs.  I wrote many a paper one handed while patting a screaming Axton.  Looking back it's a sweet memory but in the moment it drove me to tears sometimes because I was so tired from work and school.

Ax and I had fun and we definitely bonded throughout that year.  I wouldn't take a second of screaming or puking or late nights back because it made us crazy close.  What I remember the most are the fun milestones during that first year:  formula to baby food to solid food; watching his humor develop; teaching him how to make obnoxious sounds with his mouth...and spit; rolling over, sitting up and standing up.  I definitely remember when he started falling asleep in his crib, by himself.  Sometimes I hoped he would wake up and need to be rocked back to sleep :)  It all happened so fast!

Four year old Axton is witty, bright and hilarious!  He is super honest and gives away his "I love you's" freely and with meaning.  He is excited about everything and is thankful for even the smallest gift.  He makes everyone he comes into contact with feel special....it's so awesome.

Life before Axton was definitely lame :)