S is four years old and has been obsessed with trains since he was 18 months old.  This kid has every Thomas the Train character train and track set imaginable and he can spend hours constructing intricate train routes.
Little S, with his sweet little voice, interrupted a conversation I was having with his daddy to ask me to help him build a track.  One of my favorite pastimes is constructing tracks with S so I agreed.

"But," S said holding up one hand in warning, "I want to make a square track and a triangle track."

I glanced over at S's daddy and we both agreed through concerned eye contact that we were going to have to explain that train tracks can be straight, oval or circular.

After we dashed S's dreams, he walked up to his playroom and said defiantly, "I WILL make a SQUARE track.  I WILL!"

About a half an hour later I joined S upstairs and found him like this: 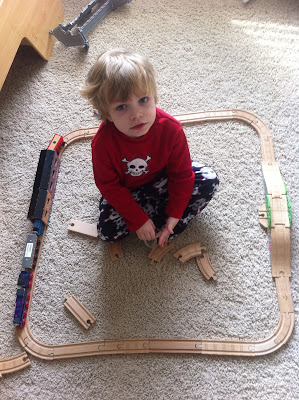 "Jessita, I CAN make a square track.  See?  You just have to round the corners."
Sometimes grown ups forget to tell kids to try or to even allow them to figure things out for themselves.  Instead ﻿we look at them gently and explain with our heads slightly cocked with sober faces why they won't be able to succeed at something.  Luckily, S is determined.  He took a "can't" and decided to prove us wrong!  Some children would have taken our defeating words and not tried to build the square track.
Lately, I've been thinking about some dreams I've wanted to pursue since I was a child.  I have let lack of self-confidence or defeating words affect whether I pursue those dreams or not.  One dream has been really nagging at me lately.  After seeing this picture of S on my phone I decided to think of this dream or idea as my square track.  Instead of letting possible obstacles get in my way I'm just going to round the corners.
This was our attempt of the triangle track.  We were one piece short but we tried! 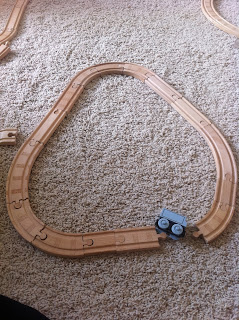