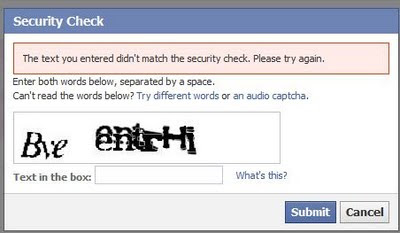 I would like to focus your attention on a couple of things in this picture.  First, the captcha letters (or so-called letters), used to verify I am not a spambot, and secondly, the text in the pink box.  Would you like to know how many times that box snickered at me while telling me that the text I entered did not match the security check?  I think eventually it added, "idiot" after please try again.

Dyslexia and captcha security checks are not friends!  I could maybe identify the letters, in the correct order, after a moment of scrutinaization IF the letters weren't also wavy and blurry.  I still seriously cannot tell if the last word has 5 letters in it or 6. . .or 7?!  The other difficult aspect for me is when I do finally identify the letters or numbers, I often type them incorrectly, usually in the wrong order but when I compare what I've typed to the letters it looks correct, even though it's not!  Gah.  So, then I get a new captcha to decipher and the viscious cycle continues.

Granted, I've always had issues with numbers.  My whole life, printed numbers would scurry all over the page at school, making math difficult for me.  Even if I understood the concept or process of solving the equation, I would almost always mess up the numbers along the way.  Math up through middle school was a breeze becasue it was pretty basic, but once I hit algebra and geometry where numbers met up with letters and symbols, it was all over for me!  I had to work my booty off to pass those classes with a D-, and up until that point I was an A and B student.

I have a love for english and writing.  I legitimately love spelling, grammar, punctuation, sentence structure.  I love editing.  I loved spelling bees as a kid.  I love words!  So who cares if I have to work harder with numbers?  Double and triple check everything?  I have letters!

I wasn't always dyslexic.  This is still a relatively "new" issue for me.  Up until I was 19, I never had an issue with letters; never had to doublecheck my spelling, etc.  That was until I had a small stroke, now called a TIA. Back then it was called, "Ummm.....we don't know what happened?  We're going to call it a migrainous stroke.  Here are some drugs that will likely make you feel worse or kill you.  Good luck."

That episode changed my life, forever, in a number of ways. One of the many long term effects?  Dyslexia.  Eight years later it still makes me self-conscious; even though I am considered mildly dyslexic and should recognize that I'm blessed not to be severely dyslexic, I'm still self-conscious about it and get mildly annoyed when I can't figure out a freakin' captcha check!

The great thing is that there are work arounds for both dyscalculia and dyslexia; most people don't even know I struggle with either.  Now I guess everyone knows, but that's okay.  I'm successful in my job, I do what I love.  Some things just take me a little longer than most people.  One of the greatest positive aspects is how awesome my boss is about triple checking my numbers at work (I handle payroll and have NEVER made an error) without making me feel like a moron.  :)

That being said, Captcha is still my arch nemesis!  Hmmm.....I might have a new idea for a Post-it Art blog post.  Yes, it involves spandex and capes!
Posted by Jess at 12:33 PM

Email ThisBlogThis!Share to TwitterShare to FacebookShare to Pinterest
Labels: Let's get real. . .