The Cotton Bowl is tonight.  Arkansas Razorbacks vs. Kansas State Wildcats.  I am an avid college football fan.  Well, more specifically, I am a grossly obsessed Arkansas Razorback football fan.  Under my suit jacket, I am wearing a t-shirt that says Woo Pig Sooie on the front in obnoxiously large lettering and a picture of a Razorback on the back.  Actually, I haven't worn my suit jacket for any more than 5 minutes today because even though I am breaking dress code by wearing a t-shirt, I can't hide my Arkansas pride!

The executives of the company I work for are just as die-hard about the KState Wildcats as I am about my Razorbacks so we're having a war of team colors, snide remarks, jokes about the opposite team.  They too are decked out in KState gear:  purple polo shirts.  There are threats that the Hog head hat I keep in my office might go missing today so I'm sticking close to my office. 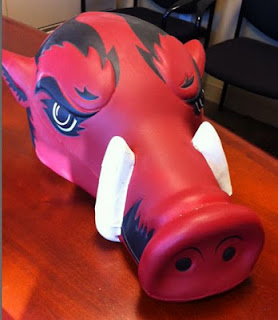 I can't wait to tune in and hear the Roar of the crowd, those lucky enough to watch the game in person in Arlington, TX.  Even though I will be watching from a television, the crowd gets me excited.  I can't wait to continue the tradition of watching Razorback football with my nephew tonight.  He has quite a collection of Arkansas Razorback gear and I love that he loves it, for me.  Tonight, I will teach my nephew a little more about football as we watch the game.  In between victorious and excited Roars I am sure we will groan a little or stress a little but it's the ROAR that makes the game.  It's the ROAR that increases team pride and connects the fans.  Well, that and also winning ;)