Aunt Jessica in the Hat

"The sun did not shine.  It was too wet to play.  So we sat in the house all that cold, cold, wet day.


Although I love rainy, grey autumn days I was disappointed that my plans with my five year old nephew were ruined by the wet weather.  The day prior I had promised him that we would spend all day outside at a park where he could climb, play, and run around screaming to his little heart's content!  Saturday morning, we woke up to the rumble of thunder. His sad face said it all.  Even our back up plan to have an indoor play date with two of my other nephews fell through.  Poor little "A" was pretty down in the dumps.


"A" had some other back up suggestions that involved toy shopping.  "We could go to Target," he said in a sing-song tone, "and get me a toy. . ."

"We could go to Michael's and buy art stuff."

"We have art supplies here."


In order to avoid doing nothing at all, we decided to have a pajama day!  The first pajama day activity was to make breakfast. We had scrambled eggs, fruit, and tall glasses of coconut milk.  It's definitely a bonus that my nephew is now old enough to help during meal prep time!

We spent the rest of the morning boxing, shooting nerf guns, and coloring.  We also watched a few episodes of Martha Speaks, an unexpectedly entertaining and educational kid's show on PBS.  Later in the day, we got dressed to go out for lunch.  Neither "A" nor I wanted to cook.  Breakfast took it all out of us, I guess. 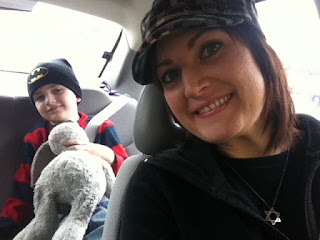 After lunch we ended up at the mall.  Basically, we ended up there because "A" could see the mall from the restaurant and very politely asked if we could go in and "just walk around".  I can't believe I fell for that because "A"'s "just walk around the mall" is the same code I use when I really mean "walk around until I find something shiny to buy".  I decided to stand firm in my earlier decision not to purchase toys, but then. . .we saw the most wonderful store.  The Lego Store!


"A" built three guys and I, of course, purchased them (and a space car kit).  I just can't deny a kid Legos!  "A" handed me one of the Lego people and said, "Look, a female cop.  Just like your friend Laura."  It's my favorite :)

At the end of our time together "A" said, "You are like 'Aunt Jessica in the Hat!"  I asked him to explain what he meant.  "You are wearing a hat and you made a fun day even though we couldn't go outside to play, you know, like the Cat in the Hat!"

He was pretty accurate because in between breakfast and the mall we managed to make quite a mess in my living room, too!